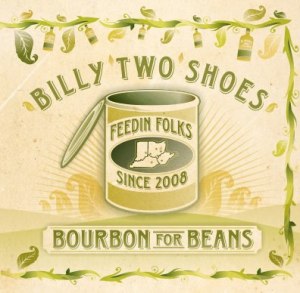 Billy Two Shoes is an Columbus, Ohio based not for profit band founded in 2008 that gives 100% of its proceeds to help feed folks that are in need. Thus far the band has given nearly $25,000 to food pantries in Ohio, Indiana, Kentucky, and West Virginia.

About “Bourbon for Beans”:

The first three albums from Billy Two Shoes have been an eclectic mixture of sounds and styles that have earned the band the oft-used nickname “Appalachian Pink Floyd” along with comparisons to groups like Ween. Their fourth installment is a journey to a noticeably different place.

The Billies have always incorporated a generous helping of Appalachian influence in all of their music, but Bourbon for Beans is a stripped down set in the form of a modern string band that leans more towards the world of bluegrass than its 3 predecessors. Gone are the drums and electric instruments.

Another new twist with the Bourbon for Beans is that “Brother” James takes a break from his more regular lead vocal duties to focus on the upright bass allowing Josh Lawson and Sean Jenkins to sing out their stories.